Scribbles on Cocktail Napkins started as a blog about my writing journey. Writing is a passion. To many, it’s a pull that simply can’t be ignored. But, it can also be a real pain the in a$* when things aren’t going our way. Sharing the writerly peaks (and valleys) with others opened my eyes to the fact that many of us are struggling with exactly the same issues: finding time to write while juggling family life and work, self-doubt, and a general crippling fear of failure.

Over the past few months the blog has evolved into a place for writers to connect, and the site is growing every day because of YOU, the readers, the commenters, and the challenge participators.

So, THANK YOU. You’re awesome.

And now I want to give back.

That’s why I’m especially pleased to share this post with you. Author J. H. Winter won the opportunity to blog here with her fabulous submission to the 2nd Sunday Scribble Challenge. It’s all about how she worked around the challenges to writing we all face, and CONQUERED the Nanowrimo mountain! She’s a great talent, and her writer’s journey is nothing short of an inspiration.

Check out the links at the bottom of this post to follow what she’s up to now! 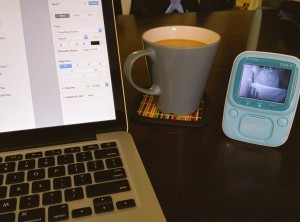 During October of 2015, I had made no plans to participate in National Novel Writing Month (NanoWriMo). It was something I’d heard about once or twice and had even looked up on Google occasionally, but there was no way I could write 50,000 words in a month. Not possible!

I have a two-year-old running around and, at best, four to five hours per day of my own to do with as I please. I would be crazy to think this goal was attainable for a busy mom like me.

While working at the library, my good friend, a Supervising Librarian at the time, broached the subject of NanoWriMo with me. She knew I had written a Middle Grade Fantasy novel which I was getting ready to query and that writing was my passion. Added to this, she was also co-running a program at the library for NanoWriMo, which would be getting local people participating together to write and help bolster each other’s spirits throughout the month.

“You should do it,” she repeated, pursing her lips. “Come on, you can push me to do it too.”

“I didn’t know you write?” I asked. She’d never mentioned aspirations in writing before.

She went on to tell me her story idea about a useless robot sparked by her frustrations with the new software program we were using at the library. Her idea actually sounded pretty hilarious. The more I thought about it, the more I thought: Well if she can do this with two kids, nearly working full time, maybe I can too.

“Okay fine. I’ll do NanoWriMo,” I conceded, after having been asked to for the third time. Maybe I could write the 50,000 words it would take to win.

November started with a kickoff party at the library and I was surprised to see nearly thirty fellow writers in the room beside me! With a goal of writing 50,000 words for the month, we had to hit around 1,667 per day (6-7 pages or so, double-spaced). Here’s how I had decided to make that happen within my schedule:

12pm-3pm (on days I didn’t work): Nap-time for James and more writing for me. If I hit my word count, a reward nap for me as well!

8pm-11pm: More writing if I still needed to hit my word count goal. If not, work on one of my other to-dos like getting my query perfected for my other manuscript, reading, crocheting, or some other craft that needed making.

On days I had work, which is in the afternoons three days a week, I would steal some time on the accounts desk to continue writing. I would do this in an email to myself that I planned to later put into the manuscript I was drafting at home. Breaks and lunches (on the weekends I worked) were spent writing in a spiral-bound notebook, which I would later type up during my block of time between 8-11pm. I had made a plan, and throughout the month, I stuck to it.

While I got ready in the early morning I would think about what part was coming next so that when I put my butt in the chair, I could take off at a run, fingers dancing across the keys as the words poured from my mind.

My husband had discouraged my doing NanoWriMo before it began on November 1st. He just didn’t want me spreading myself too thin. I was already stressed not having enough time to do everything else I wanted to do, and now to add this on top of everything? Plus, the Thanksgiving holiday was coming and we were expecting company toward the end of the month. That could affect how much I was able to write in that last week of the contest. It was just one more thing to add to the “Why not to participate” column.

Here was the most important factor: I had already wrapped my head around it. I was doing this and nothing could stop me.

I had made a schedule and, as a parent, I knew the importance of them. That schedule allowed me to have time to myself most nights, my word count having been achieved earlier in the day. The goal I had set was to write 2,000 words per day. I had read the book On Writing by Stephen King, and if he could write that much per day, why couldn’t I?

This would allow me to reach my goal by the 25th of the month. Some days I would reach that goal in the hour and a half I had before my son would get up for the day. There were even a few times I wrote over 3,000 words in a day! Patted myself on the back every time that happened.

I never missed a day of writing. 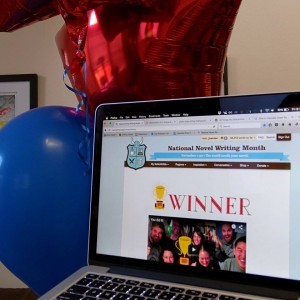 By November 18th, I’d hit the 50,000-word mark but the month was far from over, my book yet to be finished. I kept writing and sticking to the schedule. By the 30th, I had written 75,535 words and those final two words were among them, “The End.”

Not only was I a NanoWriMo 2015 winner, but I had written an entire book in a month (or at least the first draft of one anyway). In order to get to the end, I had to leave quite a few _____’s behind to be filled in later once I’d done more research. Researching would have taken up way too much time, and I didn’t want to stop the flow of the story just to look up details that were insignificant to the overall plot.

I also knew the story was going to have lyrics sprinkled amongst the pages. Since songwriting doesn’t come as naturally to me, I knew these details were better left to a time when I could just sit down with a notebook and pen, and spend hours thinking and writing, crossing out, then writing some more. November was not the time for that.

At the end of the month, I went to one last NanoWriMo event at the library. A “You Did It!” party, if you will. I won a prize for having written the most words during the month (a hand-sewn pouch for holding my laptop, made by my friend with the useless robot story idea)!

I bought some swag off the NanoWriMo website: a mug and a 2015 NanoWriMo Winner T-shirt. After that, the contest was over along with November.

Things quieted down as December rolled in and thoughts of Christmas and all the presents that needed buying came into my mind instead (see my post on Gift Giving). Yet, nothing could change the fact that I have a brand new novel sitting in the writing folder of my computer, just itching to be edited (here are some of my tips on editing).

Thank you NanoWriMo for pushing me to write again. You were just what I needed to jump-start that side of my creativity.

The moral of this story: don’t ever think you aren’t capable of doing something you want to do. You just might surprise yourself, and everyone else, in the end.

Just in case you were wondering, my friend didn’t end up writing that robot story. Life got in the way as it often does, but I am so thankful to her for pushing me to move forward with my own writing. She said just what I needed to hear, “You can do this!”

*YOU can win the chance to guest post on Scribbles on Cocktail Napkins too! Just click #SSC on the toolbar above to check out the prompt for this week’s challenge. Participation is quick and easy, and a great way to  interact with peers, and fuel creativity. It’s a relatively painless pool for writers who’ve never posted their work before to wet those feet, and for established authors and bloggers to pick up some new readers.

What are YOU waiting for? This week’s challenge wraps up Saturday. Unleash your writerly self.

9 thoughts on “Finding Time to Write”